The true story of the plague ship Ticonderoga, one of the most calamitous voyages in Australian history 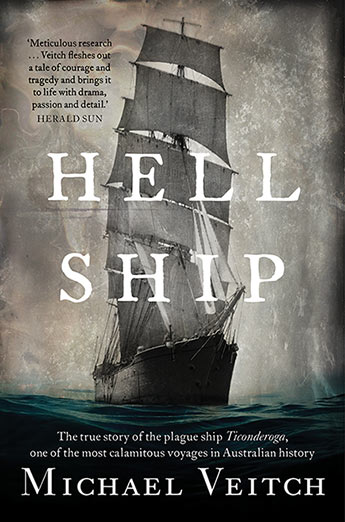 The riveting story of one of the most calamitous voyages in Australian history, the plague-stricken sailing ship Ticonderoga that left England for Victoria with 800 doomed emigrants on board.


'Meticulous research. . . Veitch fleshes out a tale of courage and tragedy and brings it to life with drama, passion and detail.' Herald Sun
For more than a century and a half, a grim tale has passed down through Michael Veitch's family: the story of the Ticonderoga, a clipper ship that sailed from Liverpool in August 1852, crammed with poor but hopeful emigrants - mostly Scottish victims of the Clearances and the potato famine. A better life, they believed, awaited them in Australia.

Three months later, a ghost ship crept into Port Phillip Bay flying the dreaded yellow flag of contagion. On her horrific three-month voyage, deadly typhus had erupted, killing a quarter of Ticonderoga's passengers and leaving many more desperately ill. Sharks, it was said, had followed her passage as the victims were buried at sea.

Panic struck Melbourne. Forbidden to dock at the gold-boom town, the ship was directed to a lonely beach on the far tip of the Mornington Peninsula, a place now called Ticonderoga Bay.

James William Henry Veitch was the ship's assistant surgeon, on his first appointment at sea. Among the volunteers who helped him tend to the sick and dying was a young woman from the Isle of Mull, Annie Morrison. What happened between them on that terrible voyage is a testament to human resilience, and to love.

Michael Veitch is their great-great-grandson, and Hell Ship is his brilliantly researched narrative of one of the biggest stories of its day, now all but forgotten. Broader than his own family's story, it brings to life the hardships and horrors endured by those who came by sea to seek a new life in Australia.

'Imaginative and vivid . . . a window onto the times, both in Britain and Australia.' The Age
More books by this author