How to Manage Your Slaves by Marcus Sido 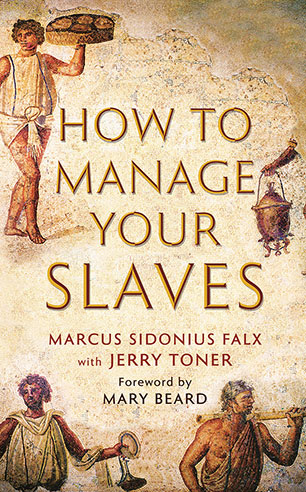 An entertaining and amazingly informative guide to the realities of slavery in ancient Rome, with an introduction by Mary Beard.

At last, a clear manual for managing slaves the Roman way. In How to Manage Your Slaves, Marcus Sidonius Falx offers practical advice, showing where and how to buy slaves and how to get the best out of them. He explains how to tell good slaves from bad, offers guidance on the punishment of miscreants, and reveals the secrets of command and authority. He covers the delicate subjects of when you should let your slaves have sex and whether to engage in sex with them yourself - and considers when to set them free. Armed with this guide you will be master in your own home: your household will be a comfort to your family, its running the envy of your neighbours.

Slavery was a core institution in the Roman world for all its long existence. As they conquered, the Romans enslaved millions and then bred from this stock to maintain their numbers in times of peace. It almost never occurred to anyone that slavery might be dispensed with and to no one at all that it was morally reprehensible. Up to now ancient slavery may have been difficult to fathom: this Roman's-eye view takes us to the heart of the matter and, based on a wealth of original sources, lets us understand just why slaves meant so much to the Romans.
More books by this author More books in this series

Marcus Sidonius Falx is a Roman of noble birth, whose family have kept slaves for generations. After serving with distinction in the legions, he retired to manage his substantial estates. He now divides his time between his country properties and his luxury villa on the Esquiline hill overlooking Rome. He has employed Dr Jerry Toner, Fellow and Director of Studies in Classics, Churchill College, Cambridge University, to set his work in context, and persuaded Professor Mary Beard to write a foreword.