The Opium War and the End of China's Last Golden Age 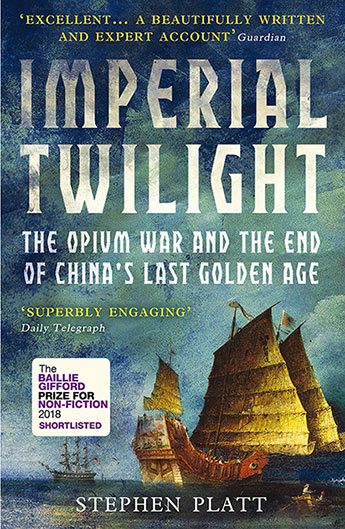 The definitive history of the Opium War between Britain and China in the nineteenth century, shortlisted for the 2018 Baillie Gifford Prize.

In 1839 Britain embarked on the first of its wars with China, sealing the fate of the most prosperous and powerful empire in Asia, if not the world. Motivated by drug profiteering and free-trade interests, the Opium War helped shaped the China we know today, sparking the eventual fall of the Qing dynasty and the rise of nationalism and communism in the twentieth century. Imperial Twilight is a riveting and revealing account of the end of China's Golden Age and the origins of one of the most unjust wars in history.

'Entertaining and well-paced... Platt's compelling book is a sobering read that should focus the minds of those who like to talk of the achievements of the Victorian age without thinking about how those were achieved, or how they were funded.' - Peter Frankopan, Spectator
More books by this author More books in this series

Stephen R. Platt holds a PhD from Yale University and is Professor of History at the University of Massachusetts Amherst. His last book, Autumn in the Heavenly Kingdom, won the Cundill History Prize in 2012.