In Search of Captain Moonlite 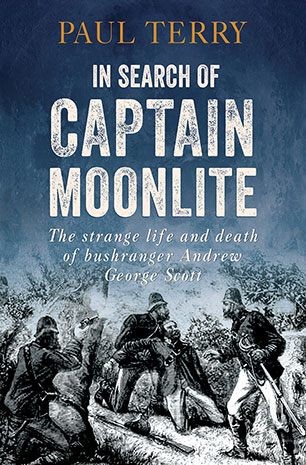 He was the gun-toting man of God who enthralled and appalled the nation for more than a decade. This is the story of the notorious bushranger, Captain Moonlite.

When a masked and cloaked bandit robbed the bank at a small gold town in 1869 he created the legend of Captain Moonlite, the gun-toting man of God who enthralled and appalled the nation for more than a decade.

Real name Andrew George Scott, he is remembered as bushranger, conman, warrior and lunatic. In an 11-year life of crime, he escaped from gaol, took to the road as a prison reformer and fought a pitched gun-battle that made him a household name.

He was a man who loved, and was loved unreservedly in return - but more than a century passed before his dying wish to be buried with his soul mate was granted. Charming, articulate and intelligent, this flawed genius was also a thief, a liar and a chameleon whose true story has been lost to myth and misinformation. Yet when he led a pathetic band of misfits to their doom he stood tall at last and proved he was worthy to be their captain.

In Search of Captain Moonlite looks for the man behind the legend. It uses little-seen histories, a remarkable cache of rare documents and the records of his time to rewrite the story of a man who was not what he seemed.

In the end, it challenges history's verdict and finds a truth that's even more spectacular than the fiction.

Paul Terry is a producer with 7 Prime, and has worked as a journalist in radio, television and newspapers in NSW, SA and Tasmania. He was part of the archaeological survey of the Kelly Gang siege site in Glenrowan, and subsequently worked as a producer on the documentary Ned Kelly Uncovered, which aired on ABC TV. He is author of The True Story of Ned Kelly's Last Stand.