A history of gay and lesbian activism in Australia 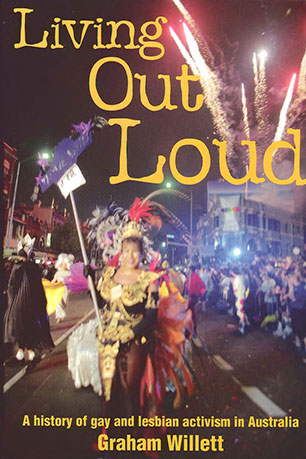 From Fred Nile to the Sisters of Perpetual Indulgence, Living Out Loud is the first full-length history of the Australian gay and lesbian movement.

From law reform to Lesbian Sex Wars, from Young Gays to Grey Gays, via demos, drag and dancing. For 40 years, Australian lesbians, gay men and their friends have struggled to change the way homosexuals are treated and thought about. And they have been remarkably successful.

Laws dating back to King Henry VIII have been repealed in all states and territories. But even before that was achieved, demands for full legal equality had moved on to the public agenda; the points of view of homosexual men and women became part of mainstream media.

In transforming society, lesbians and gay men have also transformed themselves. The old attitudes of fear and self-loathing are gone. Gay Pride is now a powerful force in the lives of millions. The communities that have been forged along the way are a significant part of Australia's rich multicultural mix - and major players in the economy.

Living Out Loud is the first full-length account of this remarkable movement and the first to attempt a national perspective. Lively, thoughtful and often surprising, this is a story of events and people who changed society.
More books by this author

GRAHAM WILLETT has been active in gay politics in Melbourne since 1979. He was a founding member of the editorial collective which produced Gay Community News (now OutRage) and participated in numerous campaigns on a range of social issues in the 1980s and 90s. Living Out Loud involved extensive empirical research and a large number of interviews with participants in the movement's various campaigns and a careful theorising of social movements and social change. He has written extensively for academic and mainstream journal and for the alternative press over the past twenty years and has wide-ranging experience of public speaking at demonstrations, union meetings and lecture theatres.

2. Liberalism and its Limits

8. Backlash, Resistance and the Community

10. Fighting For Our Lives

12. And the Last Shall Be First