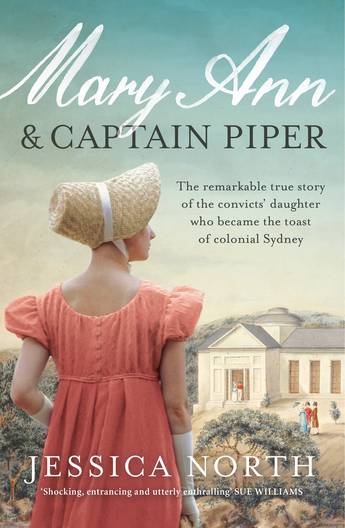 The fascinating story of the daughter of First Fleet convicts who overcame her humble origins to become the mistress of the grandest home in colonial Sydney.

'An astonishing story of lust and love in early colonial Australia, shocking, entrancing and utterly enthralling.' - Sue Williams, author of Elizabeth and Elizabeth

Born on Norfolk Island to First Fleet convicts, Mary Ann was destined to become a farmer's wife. Instead, at the age of fourteen she entranced the island's Commandant, the charming and flirtatious Captain Piper.

Learning how to behave as a lady, and overcoming the stigma of her origins, Mary Ann became mistress of the colony's grandest home when Sydney was just becoming a party town. With scores of servants, she and Captain Piper entertained on a scale that had never been seen in the colonies, hosting magnificent garden parties, dinners and balls for hundreds of guests, including governors of New South Wales. But the Pipers were living beyond their means, and trouble was around the corner.

Mary Ann's life journey from barefoot child to Sydney's fashionable society encompasses triumphs, tragedies and travels around the globe. For the first time, Jessica North's biography reveals Mary Ann Piper to be one of the most remarkable women in Australia's early history.

'An intriguing narrative of family secrets, extravagance and social advancement.' - Robin Walsh, author of In Her Own Words: The Writings of Elizabeth Macquarie
More books by this author

Jessica North is fascinated by the women of early colonial Australia. She is the author of Esther: The extraordinary true story of the First Fleet girl who became First Lady of the colony.