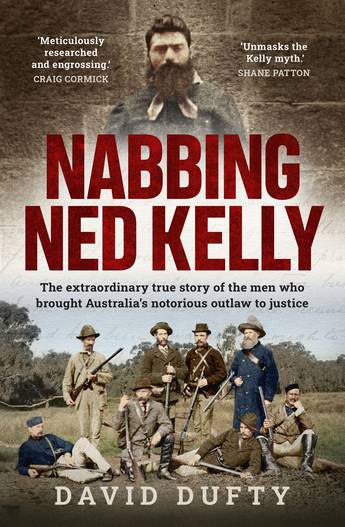 David Dufty goes back to the records to uncover the real story of the police officers who pursued the Kelly Gang. This pacey account of the capture of the Kelly Gang reads like a detective story.

He lurched through the gun smoke, his head encased in an iron helmet, and started shooting. To the weary police in the cordon around the Glenrowan hotel, he appeared like a monster, or a creature from hell.

For over a century, the Ned Kelly legend has grown and grown. He's become Australia's Robin Hood, and leader of a colonial Irish resistance. How much of the legend is true?

This is the real story of the hunt for the Kelly Gang over two long years. As gripping as any police procedural, it is an account of poorly trained officers unfamiliar with the terrain, in pursuit of the most dangerous men in the state.

By recounting the story from the perspective of the law, David Dufty gets to the heart of the story for the first time and finds answers to many unresolved questions. Why was the gang always one step ahead of the police? Did law-abiding citizens really assist the outlaws? Did the barely literate Ned really write the impassioned Jerilderie Letter? Did the police really persecute the Kelly family? Who was Michael Ward and why is he the real hero in the capture of Ned Kelly?
More books by this author

David Dufty is an historian and researcher. He is the author of The Secret Code Breakers of Central Bureau, winner of the 2017 Nib Military History Prize, and of Radio Girl, the story of a pioneering engineer and wartime legend.