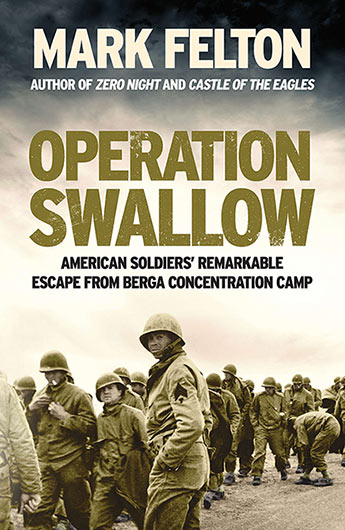 How an American soldier saved his comrades from being enslaved by the Nazis in the dying days of World War Two.

Operation Swallow is the true story of how a small group of American soldiers, inspired by a charismatic but reluctant leader named Hans Kasten, worked to save hundreds of fellow servicemen from a Nazi plan to turn Jewish prisoners of war into concentration camp slaves.

It begins in the snowy forests of the Ardennes during Christmas 1944 and ends at the charnel house of Buchenwald concentration camp in spring 1945. It is a remarkable battle of wills between a young GI thrust into a leadership position he didn't want and an SS officer who will stop at nothing to complete his orders.

Written from personal testimonies and official documents, it is an escape story replete with courage, sacrifice, torture, despair and salvation. Even more remarkably, it is a story that has barely been told before, a chapter of US military history that the American government tried to suppress for decades - and an uplifting story that deserves to be widely known.
More books by this author

Mark Felton is the author of numerous books on military history, including Castle of the Eagles ('an extraordinary and largely forgotten wartime story, brought back to life in this Boys' Own account' - Daily Mail) and Zero Night ('a thundering good read' - History of War), both of which are in development as Hollywood movies.