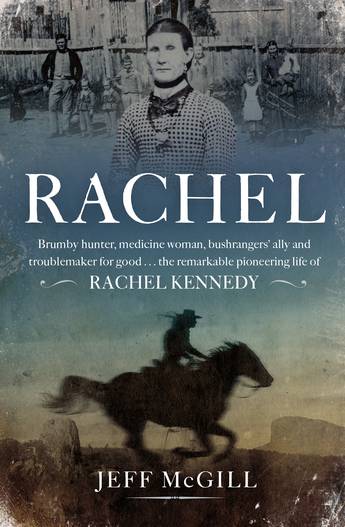 Rachel Kennedy stood out on a wild frontier dominated by men . . . her extraordinary and unputdownable pioneering story is told for the first time

'Just a girl, but when it came to chasing wild horses nobody questioned Rachel Kennedy's skill in a saddle. What raised eyebrows was the type of saddle she used: a man's.'

Rachel Kennedy was a colonial folk hero. Born in the wild and remote Warrumbungle mountains of western New South Wales in 1845, she was described by Duke Tritton of The Bulletin as Australia's greatest pioneer woman of them all.

Rachel caught brumbies, hid bushrangers, went to war with squatter kings, fed starving families during the shearing strikes, worked as a revered bush nurse and midwife, and fought for the underdog after observing the bitter experiences of the Chinese on the goldfields. She also built rare friendships with Aboriginal people, including a lifelong relationship with her 'sister' Mary Jane Cain, a proud campaigner for the rights of her people.

Meticulously researched and written with compelling energy, this is a vivid and at times heartbreaking story of a pioneering woman who left a legacy that went well beyond her lifetime.
More books by this author

Jeff McGill is a freelance writer, photographer and former newspaper editor who loves telling Australian stories. He is the great-great grandson of Rachel Kennedy and his heart lifts every time he sees the Warrumbungle Mountains on the horizon.