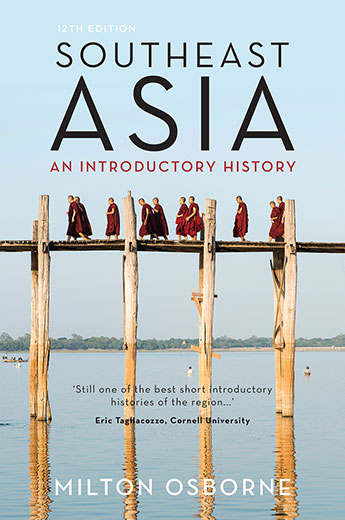 A lively and easy to read guide to Southeast Asian history written by one of the world's pre-eminent historians of the area.

The first edition of Southeast Asia: An introductory history was published in 1979 and immediately filled a need for travellers and students interested in a tantalisingly different part of the world. Subsequent editions (translated into Japanese, Khmer, Korean and Thai) have continued to document with great perception the enormous changes and dramatic growth experienced in the region.

Dr Milton Osborne has been a resident, student and fascinated observer of Southeast Asia for over 50 years. This familiarity has resulted in a highly readable and lively chronicle. While giving due regard to the early history of the region, Osborne concentrates on the changes that have taken place since the eighteenth century: the impact of colonial rule, economic transformations of the 19th and 20th centuries, the emergence and triumph of the independence movements, the impact of social change and the pivotal roles played by religion, ethnic minorities and immigrant groups. He also provides an introduction to the art of the region and a comprehensive guide to literature about Southeast Asia.

Clearly written and extensively illustrated this twelfth edition of Southeast Asia: An introductory history remains a classic in the field.

'While deepening our understanding of Southeast Asia, this fine introduction reminds us of the importance of history itself. ' - Anthony Milner, Basham Professor of Asian History, Australian National University
More books by this author

Dr Milton Osborne is a writer and consultant on Asian issues and the author of many books, including Sihanouk: Prince of Light, Prince of Darkness, River Road to China, The Mekong: Turbulent past, uncertain future and Exploring Southeast Asia: A traveller's guide to the region. He is a regular visitor to Southeast Asia and for the past decade has been a Nonresident Fellow at the Lowy Institute for International Policy, Sydney.

1. What is Southeast Asia?

3. Courts, Kings and Peasants: Southeast Asia Before the European Impact

4. Minorities and Slaves: The Outsiders in Traditional Southeast Asia

5. The European Advance and Challenge

7. The Asian Immigrants in Southeast Asia

9. The Second World War in Southeast Asia 155 10 Revolution and Revolt: Indonesia, Vietnam, Malaya and the Philippines

11. Other Paths to Independence

12. An End to Post-colonial Settlements, and Beyond I: Indonesia, Vietnam, Cambodia and Laos

13. An End to Post-colonial Settlements, and Beyond II: Burma (Myanmar), Malaya, Singapore, the Philippines and the Thai Exception 227

14. The Challenges of Independence in Southeast Asia

15. Southeast Asia's Modern History: An Overview of the Present and the Recent Past