How felons built a free society 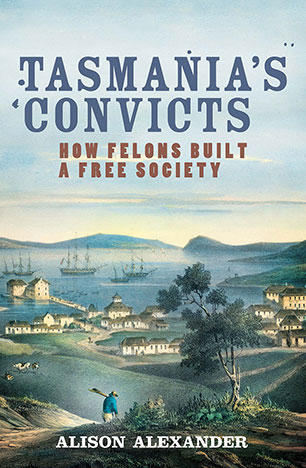 To the convicts arriving in Van Diemen's Land, it must have felt as though they'd been sent to the very ends of the earth. In Tasmania's Convicts Alison Alexander tells the history of the men and women transported to what became one of Britain's most notorious convict colonies.

Following the lives of dozens of convicts and their families, she uncovers stories of success, failure, and everything in between. While some suffered brutal conditions, most served their time and were freed, becoming ordinary and peaceful citizens. Yet, over the decades, a terrible stigma became associated with the convicts, and they and the whole colony went to extraordinary lengths to hide it. The majority of Tasmanians today have convict ancestry, whether they know it or not. While the public stigma of its convict past has given way to a contemporary fascination with colonial history, Alison Alexander debates whether the convict past lingers deep in the psyche of white Tasmania.

'.a beautifully written and penetrating account of an important aspect of Australia's past.' - The Age
More books by this author

Dr Alison Alexander is a seventh-generation Australian, with convict ancestors in the first, second and third fleet. She was formerly a lecturer in history at the University of Tasmania, and is the editor of The Companion to Tasmanian History and the author of The Ambitions of Jane Franklin.

1 Birth of a convict colony

2 Convicts in Britain and on the high seas

10 For the Term of His Natural Life

11 The One Forbidden Subject

12 'A thing of which we may well feel proud'

Appendix 2: People mentioned in the text