The unlikely story of convict schemers, a stolen brig and an escape from Van Diemen's Land to Chile 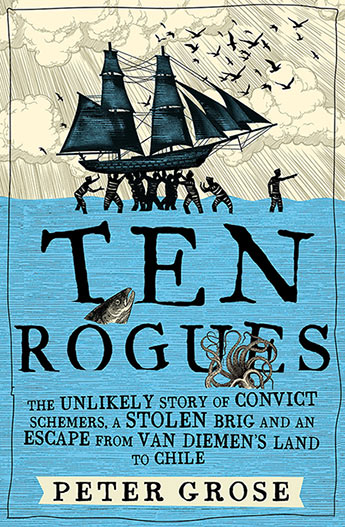 A band of convicts, a scoundrel by the name of Jimmy Porter, a stolen brig and a daring plan for escape

From the grim docks of nineteenth-century London to the even grimmer shores of the brutal penal colony of Norfolk Island, this is a roller-coaster tale. It has everything: defiance of authority, treachery, piracy and mutiny, escape from the hangman's noose and even love. Peopled with good men, buffoons, incompetents and larrikin convicts of the highest order, Ten Rogues is an unexpected and wickedly entertaining story from the great annals of Australia's colonial history.

With the lightness of touch of the master storyteller that he is, Peter Grose brings to irresistible life the story of a small band of convicts who managed to escape the living hell of the Tasmanian penal colony of Sarah Island. Their getaway began by stealing the leaky and untested brig they had helped to build, and then sailing it across the Pacific from Tasmania to Chile with neither a map nor a chronometer.

But their story does not begin or end there. From the strong connection between the slave trade and convict 'transportation' to the possible illegality of the whole convict system, Ten Rogues shines a light into some dark and previously well-hidden corners of colonial history.
More books by this author

Peter Grose began his working life as a journalist for the Sydney Daily Mirror before becoming the first London correspondent of The Australian. He switched from journalism to literary agency, setting up Curtis Brown Australia, then the first literary agency in Australia and now the biggest. After moving to the London office of Curtis Brown, where he continued as a literary agent, he joined the London publisher Martin Secker & Warburg as publishing director. In his 'retirement' he returned to his first love: writing. He is the author of three best-selling history books. He is also the proud holder of British, American and Australian private pilot's licences, and has flown all over Australia, Europe and the United States in single-engined aircraft. He lives in France.