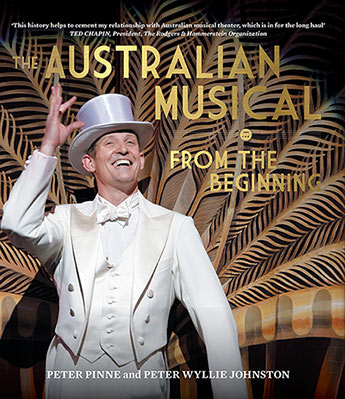 The definitive history of a century of musical theatre in Australia, including behind the scenes stories of achievement and disaster, fully illustrated in colour.

Musical theatre has a special place in the hearts of Australians. Whether it is The Boy from Oz, Bran Nue Dae or Muriel's Wedding, we love to see Australian stories on the big stage with all the glamour, energy and vibrancy a musical can offer.

However magical they are on stage, performances leave behind few traces. Australia has a rich, hidden history of achievement in musical theatre which is now largely forgotten. Drawing on their long careers in musical performance, and extensive research in public and private collections, Peter Wyllie Johnston and Peter Pinne have compiled a definitive account of the history of musical theatre in Australia.

From small amateur performances in the early days, to international achievements, to the new wave of Australian musicals from the 1990s right through to the explosion of creativity in the 21st century, they recount the emotional roller-coaster of successes and disappointments of one of the most demanding art forms. Also included is an authoritative guide to over 300 Australian musicals.

Richly illustrated with colour photos from the early days to the present, The Australian Musical is a book to treasure for years to come, and an invaluable resource for anyone involved with theatre and music.

'This history helps to cement my relationship with Australian musical theater, which is in for the long haul.' - TED CHAPIN, President, The Rodgers & Hammerstein Organization

'This fine book is surely the family tree of the Australian musical - an impressive study and fascinating read.' - REG LIVERMORE AO

'Groundbreaking . . . strips away assumptions and misconceptions about Australian musicals, and exposes their true history for the first time' - from the introduction by MARK MADAMA, Associate Professor of Musical Theatre, University of Michigan
More books by this author

Peter Wyllie Johnston is a musician and writer, Director of the Australian Music Theatre Research Institute (TAMTRI) and Associate Professor with honorary status at the University of Melbourne. His publications include From the Melburnian (2011), The Nick Enright Songbook (2014), Morag Beaton-Her Life and Her Art (2019) and more than 200 articles on music. He is the composer of the music and lyrics of Moses-the Spirit of Freedom, the additional book of Joanna White's Girl in Pink, and the music, lyrics and book (with literary contributions by Trent O'Bryan) of Tamarama.

Peter Pinne is one of the most prolific creators of Australian stage musicals, with credits including Prisoner--Cell Block H the Musical, and the theme tune for Sons and Daughters. For many years he worked in senior roles for the Grundy Organisation on such iconic shows as Neighbours, Prisoner, The Young Doctors and Secret Valley. He is the author of the discography Australian Performers, Australian Performances, and writes reviews and articles for industry magazine Stage Whispers.

Part II: The A-Z of the Australian Musical