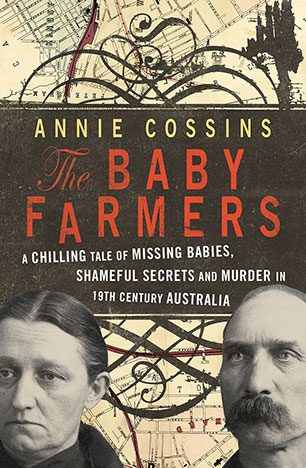 The most common murder victim in 19th century Australia was a baby, and the most common perpetrator was a woman. Annie Cossins pieces together the fascinating story of the most infamous legal trial in Australia to reveal an underworld of struggling mothers, unwanted babies, and a society that preferred to turn a blind eye.

'The book's power stems from its devastating details; Cossins establishes a tone so vivid it's reminiscent of Dickens.' Publishers Weekly

In October 1892, a one-month-old baby boy was found buried in the backyard of Sarah and John Makin, two wretchedly poor baby farmers in inner Sydney. In the weeks that followed, 12 more babies were found buried in the backyards of other houses in which the Makins had lived. This resulted in the most infamous trial in Australian legal history, and exposed a shocking underworld of desperate mothers, drugged and starving babies, and a black market in the sale and murder of children.

Annie Cossins pieces together a dramatic and tragic tale with larger than life characters: theatrical Sarah Makin; her smooth-talking husband, John; her disloyal daughter, Clarice; diligent Constable James Joyce, with curious domestic arrangements of his own; and a network of baby farmers stretching across the city. It's a glimpse into a society that preferred to turn a blind eye to the fate of its most vulnerable members, only a century ago.

'A very moving book.[It] brings to life the awful poverty and the immoral 'morality' of the times. conditions which broke that most sacred and powerful bond - between mother and baby - and broke the hearts of impoverished young women.' - Gabrielle Lord

'A very readable and accessible history of a terrible time. The writer has a passionate grasp of her subject and her time.' - Kerry Greenwood

'Cossins is both relentless in her search, and engrossing in her writing' - Lucy Sussex
More books by this author

Annie Cossins is an author, actor and criminologist. She is an Associate Professor in the Law School at the University of NSW and a leading legal expert on evidence law and sexual assault law reform. In 2009 she played the role of Sarah Makin in an episode of a TV series, Deadly Women.

PART I: WHO WERE THE MAKINS?

3 John Makin: son of the middle class with a past

7 To catch a baby farmer

8 The first inquest: two babies called A and B

9 Constable James Joyce: Joycean fictions and the art of deceit

10 More digging and the strange behaviour of the Makins

11 The next five inquests: the Makins' lives stripped bare

12 The longest, saddest inquest: clothing and other complications

13 The mysterious Mr and Mrs Wilson give evidence

14 The obsessions of James Joyce: digging, redigging and more digging

17 The trial of the century: a judge out of his depth

18 The first appeal: the Makins' struggle against the hand of fate

21 Makin's last chance: an 'innocent' man under the thumb of a 'fiendish' woman

22 From convict daughter to convict

24 The lives that were left