The Biggest Estate on Earth

How Aborigines made Australia 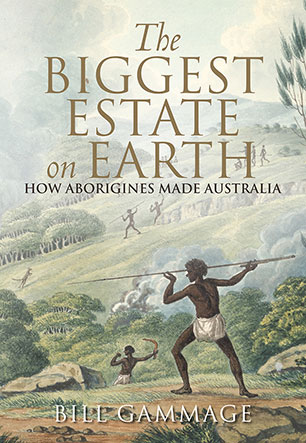 Explodes the myth that pre-settlement Australia was an untamed wilderness revealing the complex, country-wide systems of land management used by Aboriginal people.

Winner of the Prize for Australian History in the Prime Minister's Literary Awards 2012; The History Book Award in the Queensland Literary Awards 2012; the Victorian Prize for Literature 2012; and the ACT Book of the Year 2012
Across Australia, early Europeans commented again and again that the land looked like a park. With extensive grassy patches and pathways, open woodlands and abundant wildlife, it evoked a country estate in England. Bill Gammage has discovered this was because Aboriginal people managed the land in a far more systematic and scientific fashion than we have ever realised.

For over a decade, Gammage has examined written and visual records of the Australian landscape. He has uncovered an extraordinarily complex system of land management using fire and the life cycles of native plants to ensure plentiful wildlife and plant foods throughout the year. We know Aboriginal people spent far less time and effort than Europeans in securing food and shelter, and now we know how they did it.

With details of land-management strategies from around Australia, The Biggest Estate on Earth rewrites the history of this continent, with huge implications for us today. Once Aboriginal people were no longer able to tend their country, it became overgrown and vulnerable to the hugely damaging bushfires we now experience. And what we think of as virgin bush in a national park is nothing of the kind.
More books by this author

Bill Gammage AM FASSA is an Australian historian, Adjunct Professor and Senior Research Fellow at the Humanities Research Centre of the Australian National University (ANU). He is also the author of The Broken Years, and The Sky Travellers.

2. Canvas of a continent

Why was Aboriginal land management possible?

3. The nature of Australia

How was land managed?

Appendix 2: Current botanical names for plants named with capitals in the text