The Revolution of '89 Witnessed in Warsaw, Budapest, Berlin and Prague 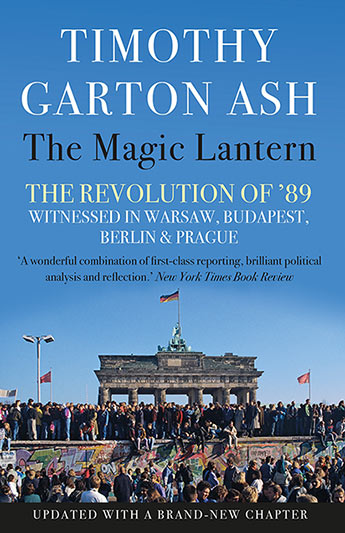 A stunningly evocative eye-witness account of the revolutions that swept Communism from Eastern Europe in 1989, reissued with a new chapter to coincide with the thirtieth anniversary of these epochal events.

The Magic Lantern is one of those rare books that capture history in the making, written by an author who was witness to some of the most remarkable moments that marked the collapse of Communism in Eastern Europe.

Timothy Garton Ash was there in Warsaw, on 4 June, when the communist government was humiliated by Solidarity in the first semi-free elections since the Second World War. He was there in Budapest, twelve days later, when Imre Nagy - thirty-one years after his execution - was finally given his proper funeral. He was there in Berlin, as the Wall opened. And most remarkable of all, he was there in Prague, in the back rooms of the Magic Lantern theatre, with Vaclav Havel and the members of Civic Forum, as they made their 'Velvet Revolution'.
More books by this author More books in this series

Timothy Garton Ash is the author of eight books of political writing - 'history of the present' - which have charted the transformation of Europe over the last three decades. He is Professor of European Studies at the University of Oxford, where he is Isaiah Berlin Professorial Fellow at St Antony's College, and a Senior Fellow at the Hoover Institution, Stanford University. His essays appear regularly in the New York Review of Books and his weekly column for the Guardian is widely syndicated across Europe, Asia and the Americas. He has received many awards for his writing, including the Somerset Maugham Award and the Orwell Prize.