The Communist Party of Australia from heyday to reckoning 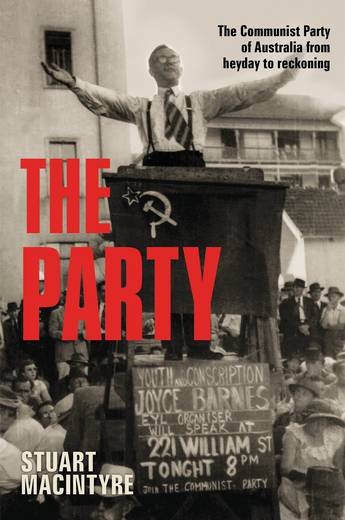 The long awaited second volume in Stuart Macintyre's definitive history of the Communist Party of Australia.

Communism was unlike any other political movement Australia has ever seen. At its peak in the 1940s, unions led by communists could call a strike that paralysed the nation, and communists influenced the highest level of government, and commanded the unswerving loyalty of thousands. It showed working men and women they could have a better life, and gave them the tools to achieve it.

Stuart Macintyre reveals how sources of strength in the party's heyday became the undoing of the party over the following two decades. Unconditional support for the Soviet model broke down as the horrors of Stalinism were revealed. Public support for the party eroded during a series of strikes, and hostility from mainstream politics and security services took a toll. But for those who remained, the comradeship and intense political engagement are the strongest memories.

The Party is the second volume of Stuart Macintyre's masterful history of Australian communism.

'Rich and compelling stories of activists, idealists, militants, internationalists and anti-racists who believed they were on the side of history - until they weren't.' - Judith Brett, Emeritus Professor of Politics at La Trobe University

'Stuart Macintyre is the great historian of post-war Australia - and this book is no exception. Macintyre's attention to detail is coupled with a lively writing style that holds the reader's attention.' - Hon Tanya Plibersek MP, Member for Sydney

Stuart Macintyre AO, FAHA, FASSA was Emeritus Laureate Professor of History at the University of Melbourne. He was the author of many books, including A Concise History of Australia, The History Wars, Australia's Boldest Experiment, Glorious Days, and The Reds: The Communist Party of Australia from origins to illegality.