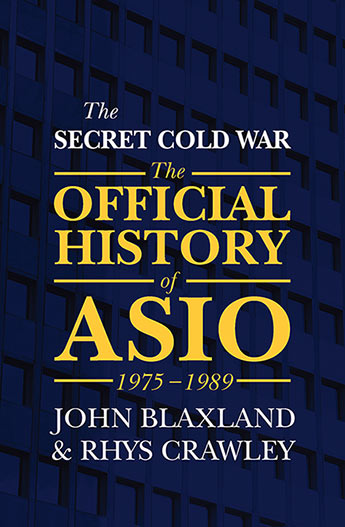 The inside account of Australia's national intelligence organisation as it grappled with continuing espionage from foreign agents and the rise of terrorist attacks on Australian soil during the years of the Fraser and Hawke governments. This is the third and final volume of the Official History of ASIO.

The Cold War between the West and the Soviet Bloc didn't end with detente in 1975: it just went underground. Until the fall of the Berlin Wall in 1989, tensions between the superpowers continued to play out across the world.

Until now, few would have known of the surprising extent of clandestine operations in Australia by foreign intelligence operatives and the violence-prone activities of local extremist groups from the Middle East, Armenia and Croatia in the 1970s and 1980s. Meanwhile, prompted by probing royal commissions and reviews, ASIO was being systematically transformed into a modern intelligence organisation.

The Secret Cold War uncovers behind the scenes stories of the Hilton bombing in Sydney, assassinations of diplomats, the Combe-Ivanov affair, and the new threat from China. It reveals that KGB officers were able to recruit and run agents in Australia for many years, and it follows ASIO's own investigations into persistent allegations of penetration by Soviet moles.

The Secret Cold War is the third and final volume of The Official History of ASIO.

'The publication of John Blaxland and Rhys Crawley's The Secret Cold War, the third volume of The Official History of ASIO, brings to completion one of the more remarkable ventures in Australian publishing.' - Senator the Hon George Brandis QC
More books by this author More books in this series

John Blaxland is a Senior Fellow at the Strategic and Defence Studies Centre at the Australian National University, and a former Director of Joint Intelligence Operations at Headquarters Joint Operations Command. He is the author of the second volume in The Official History of ASIO, The Protest Years.

Rhys Crawley works at the Australian War Memorial where he is an author of the official history of Australian military operations in Afghanistan. Prior to this, while working on all three volumes of The Official History of ASIO, he was a Research Fellow at the Strategic and Defence Studies Centre at the Australian National University.

1. Hope for a New Beginning: Responding to New Leadership and the Royal Commission on Intelligence and Security, 1975-1983

15. A Conceptual Shift: Developing New Approaches to Subversion and Terrorism, 1983-1989

19. Looking for Moles: Counterintelligence and the Penetration of ASIO, 1975-1989

Conclusion: Reflections on ASIO and the End of the Cold War