A story from the heart of the land 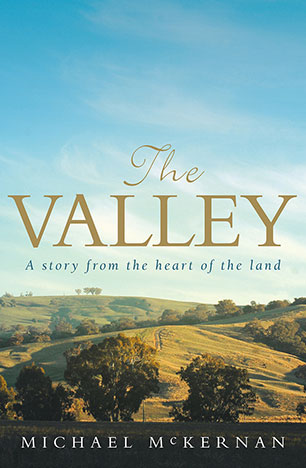 A history of rural Australia across two centuries, told through the eyes of the people who have lived and worked in a small valley in rural New South Wales.

'I had two paddocks to look after,' said Les Gilpin, 'one of 1800 acres, one of 1000 acres. My job was to keep the rabbits down.' Les left school when he turned fourteen and went to work as a rabbiter, living in a corrugated iron hut, on a remote corner of a property. This was Australia in 1945. Les stuck it out at the Back Hut, as his little home was called, for six years. His voice is the authentic voice of Australia.

Before he went to war in 1939, Geoff Sheehan had hardly ever been out of the valley of his birth. He grew up in the valley believing that he would be a worker all his life, good with horses, much valued for his hard work and loyalty. Through his service to his country in war Geoff Sheehan became a landowner in the valley, a soldier-settler. His is the authentic voice of Australia.

Michael McKernan has listened to the stories of the people of the valley of Jugiong in southern New South Wales, and in telling their stories he shows that in knowing the detail of the individual stories we know the national story. The voices of The Valley are of workers and owners, of soldiers and politicians, of men and women, of rabbiters and shearers. The Valley presents the voice and story of Australia.
More books by this author

Michael McKernan is a professional writer, reviewer and commentator in the area of Australian history. He is an advisor to the ABC and appears weekly on ABC radio and is author of The Brumbies, Drought and The Strength Of A Nation.