Borders, boundaries and possession in the Timor Sea 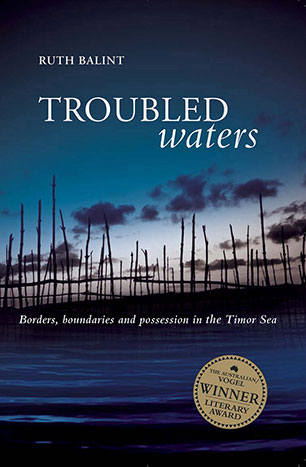 The joint-winner of the 2003 The Australian/Vogel Literary Award - a lucid account of Australia's relationship with the Timor Sea, with Indonesian fishermen, with the relationship between those Island people and the Aboriginal communities of north-west Australia.

Troubled Waters tells the story of Australia's northern waters and their dramatic transformation in the twentieth century from a backwater to the most militarised and fiercely guarded region in Australia. Once a bridge between two coastlines and two cultures, the Timor Sea has become, in the last years of the twentieth century, the nation's frontline against the threat of invasion.

When Australia expanded its territorial boundaries by 200 nautical miles in 1979, Australia reached the doorstep of eastern Indonesia. The occupation of the sea was driven by the myth of mare nullius, the idea that the sea was empty and that no-one would suffer the loss of them. But for the traditional fishermen of West Timor, these waters are their sea garden. Ruth Balint tells this powerful story of a people evicted from their seas and their struggle for survival.

'. a social, political and cultural history with a particularly strong chapter on people smuggling and the Tampa . . . absorbing and compelling.' Andrew Riemer

'Very impressive. Lucid and timely, the ambiguities, resonances and ways of seeing it explored are genuinely fascinating.' James Bradley
More books by this author

Ruth Balint was born and grew up in Sydney and holds a doctorate in History from the University of Sydney. Her family moved to Broome many years ago, and she now counts Broome as her second home. It was there that she first encountered the Indonesian fishermen, and listened to their stories in Broome Prison. This led to her writing and directing the film Troubled Waters which went on to win the Dendy Best Documentary Award in 2002, a human rights award and a nomination for an If award. Research for the film became the springboard for this book. Ruth has since made another shorter current affairs story for SBS, produced radio documentaries for ABC Radio National and worked as an oral historian. She is currently working on two new projects, a documentary film about the Sydney and Budapest connection in the post-war era, and a new history about the place of Australia's diverse and far-flung islands in the geographical imagination.