Victory in the Kitchen

The Life of Churchill's Cook 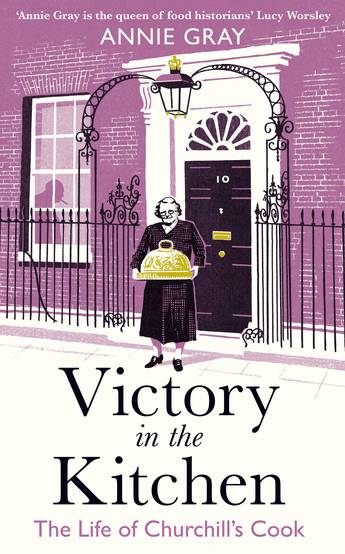 The story of the twentieth century through one woman's life and the food she cooked for our most famous Prime Minister, Winston Churchill.

In a suburban house in 1977 an elderly lady destroyed her memoirs. Her life, she felt, was not one people would want to read about. The life of a woman, born into the working class, brought up to go into service, who had married, had a daughter, and gone back to work after her husband died, was so like that of many others, that there could be little there worth saving.

This is the story of a woman who was, indeed, like many other people: not a royal, not rich, not famous, simply someone who worked hard and enjoyed her life. Beginning in 1882, she ranged through life in the country, life in the town, life in her own house, and in that of others. She travelled, married, had children and a highly successful career. For while Georgina Landemare saw herself as ordinary, her accomplishments, and the life she lived, were anything but. She started her career as a nursemaid, and ended it cooking for one of the best-known figures in British history, a man to whom food was central, not only as a pleasure by itself, but as a diplomatic tool in a time when the world was embroiled in a worldwide war.

Victory in the Kitchen is a culinary biography: a life lived through food ranging from rural Berkshire to wartime London, via Belle Epoque Paris and prohibition-era New York. Through one eager eater, and one skilled cook, Annie Gray tells the story of the way Victorian tastes changed and 20th century food developed, taking a look into the kitchens of the time complete with evolving technology and attitudes towards domestic service.

Annie Gray is an historian, cook, broadcaster and writer specialising in the history of food and dining in Britain from around 1600 to the present day, conducting her research both in libraries and in kitchens. She has worked at Audley End amongst other historical kitchens, and gives lectures all over the country. She has presented TV history documentaries including Victorian Bakers and The Sweetmakers, and appears on BBC Radio 4's The Kitchen Cabinet. She lives in East Anglia.