Voices From the Past 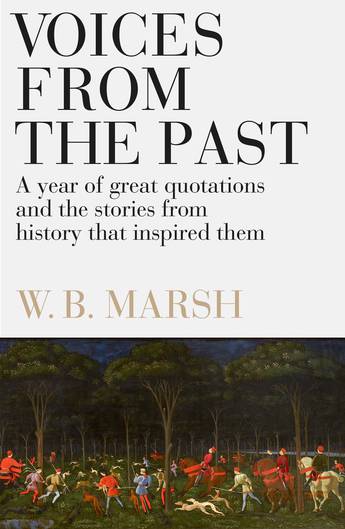 In a treasure trove for history buffs, W. B. Marsh fleshes out the context behind famous quotations associated with each day of the year, sending us back and forth in history from the time of the Ancient Egyptians to the world we live in today.

I am tasting the stars!' (4 August 1693) The monk Dom Perignon tests the result of his new techniques in the making of sparkling wine, and champagne is born.

'I did not write it. God wrote it. I merely did his dictation.' (20 March 1852) Harriet Beecher Stowe publishes Uncle Tom's Cabin, the nineteenth century's bestseller apart from the Bible.

'From the sublime to the ridiculous is only a step.' (18 October 1812) Napoleon's all-conquering Grande Armee begins its slow and ignominious retreat from Moscow.

W.B. Marsh spent two years as an officer in the US Marine Corps, followed by a career in international advertising. Voices from the Past is his fourth book, after 365, 366 and Tales of War, all of which were written with Bruce Carrick, who died in 2018.