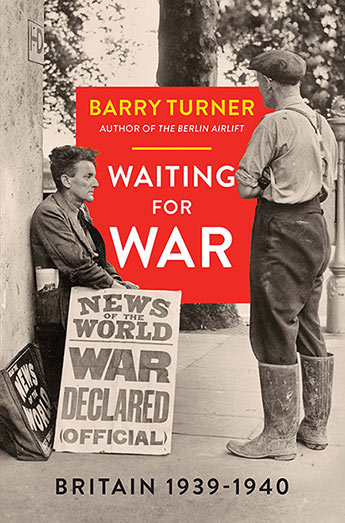 For the 80th anniversary of the outbreak of war in 1939, a new history of the 'Phoney War'

At the outbreak of war in 1939, ordinary people were quickly forced to adapt to the realities of a nation under dire threat.

But it soon became known as the Phoney War, a time when official incompetence reigned supreme. Theatres and cinemas were closed and football matches cancelled, only for the government to realise belatedly that morale was plunging as a result. Thousands of women and children were evacuated to the countryside, only for many to flood back to the cities, preferring the dangers to separation from their families. Censorship of news was heavy-handed and bred widespread resentment.

In fact, the period from September 1939 to May 1940 was a time of intense political and military activity - the blitzkrieg on Poland, the start of the U-boat menace, the disastrous Norwegian campaign, the political manoeuvrings that brought Churchill to power. Barry Turner skilfully weaves these events into a compelling home front narrative which evokes the fears and dangers but also the humour and the absurdities of everyday life in the dark days of 1939-1940.
More books by this author

Barry Turner is a popular historian whose many books include Suez 1956, When Daddy Came Home (with Tony Rennell), Karl Doenitz and the Last Days of the Third Reich (Icon, 2015) - 'a page-turning narrative' (Daily Mail) - and The Berlin Airlift (Icon, 2017) - 'a fine piece of popular history' (BBC History).