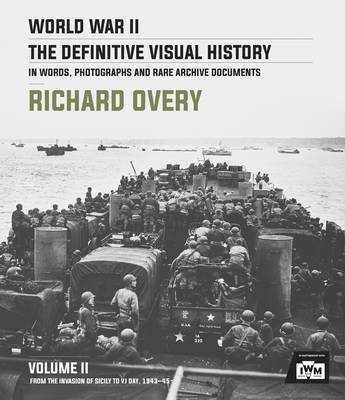 Published to commemorate the 75th anniversary of Victory in Europe Day (May 2020) and Victory in Japan Day (August 2020), this is an outstanding concise history of the Second World War written by one of Britain's foremost historians.

The second in a two-part history of the World War II: The Essential History, Vol 2 (From the Invasion of Sicily to VJ Day 1943-45) examines the Allies' long struggle for victory against Axis powers which had once seemed unbeatable. Starting with the Allied invasion of mainland Europe in the west and ending with the explosion of the atomic bombs on Hiroshima and Nagasaki in the east we are taken page by page through the gripping events which eventually saw the end of six long years of war.

The concluding volume in this landmark series contains some of the most dramatic moments of the war: the use of so-called V-weapons by the Nazis to maximise civilian casualties; the unforgettable story of D-Day and the battle for Normandy; the Battle of the Bulge, which finally broke Axis power in the West; and the indescribably bloody and brutal race to Berlin that finally extinguished the Third Reich.
More books by this author

Richard Overy, Professor of History at the University of Exeter, is a world-renowned historian and an expert on the history of the Second World War, air warfare and the Hitler and Stalin dictatorships. He has won five prizes for his published work, including in 2005 the Wolfson prize for History. He is the author of Carlton's landmark The Battle of Britain Experience, in association with the RAF. He is a regular contributor to the Independent, Sunday Telegraph and Guardian.

Category: History
ISBN: 9780233006215
Table Of Contents: Operation 'Husky': Invasion of Sicily • Italy: Invasion and Surrender • Operation 'Cartwheel': War for New Guinea • Island Hopping in the Pacific: Gilbert and Marshall Islands • The Battle for Monte Cassino • D-Day • Battle for Normandy • The V-weapons Campaign • The Marianas: Defence to the Death • Operation 'Bagration' • Breakout: Operation 'Cobra' • The end of Vichy France: Operation 'Dragoon' • The Liberation of Paris • Operation 'Market Garden' • The Recapture of the Philippines • The Battle of the Bulge • Soviet Advance on Germany: Vistula-Oder Operation • Iwo Jima • The Fire-bombing of Tokyo • The Western Advance in Germany: From the Rhine to the Elbe • Okinawa • Liberation of the Camps • Victory in Burma • Battle for Berlin • Victory in Italy • The German Surrender • The Atomic Bombs • The Japanese Surrender.
Publisher: Welbeck
Imprint: Welbeck
Page Extent: 160
Format: Hard Cover
Subject: History