World War II from Above

A History in Maps and Satellite Photographs 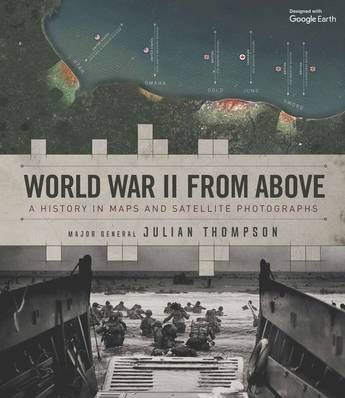 Written by a highly decorated soldier and leading military history expert, this is an innovative, richly detailed and visually stunning overview of history's most destructive conflict.

World War II from Above offers a never-before-seen combination of annotated satellite images and expertly drawn battle maps. It aims to satisfy both the military history buff and those seeking a visually stunning history gift book, bringing the war vividly and dramatically to life by showing the actual landscapes where battles took place along with specially commissioned annotations depicting remarkable events, troop movements, heroic last stands, or even where individual soldiers stood or fell.

Each of the 25 chapters features an enhanced Google Earth image, along with specially commissioned battle maps showing every facet of the conflict in exceptional detail.

Here you will find all the key milestones of World War II: the invasion of France, Germany's first blitzkrieg offensives, the Battle of Alamein, Monte Cassino, Arnhem, the invasion of Sicily, the Battle of the Bulge, Iwo Jima, D-Day and the final push to Berlin, along with a host of other strategic and battle maps from every geographical location.

Written by a highly decorated soldier and leading military history expert, this is an innovative, richly detailed and visually stunning overview of history's most destructive conflict.
More books by this author

Major General Julian Thompson CB OBE served in the Royal Marines for 34 years and commanded the Royal Marine Commandos and the two battalions of the Parachute Regiment during the Falklands War. Since retiring he has been a visiting professor at King's College, London. His books include The 1916 Experience (2006), The Victory in Europe Experience (2005), The Second World War in 100 Objects (2012) and 1918: How the First World War was Won (2018).