Inside the world of trivia, obsession and million dollar prizes 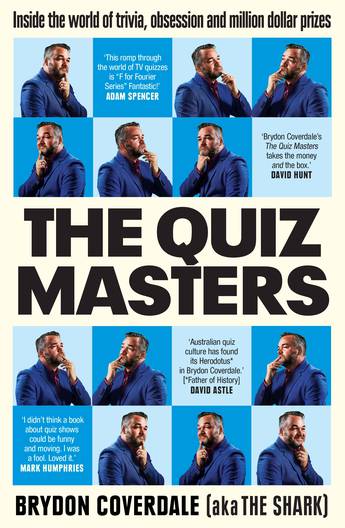 'The Shark' reveals the hidden stories and winning strategies from the world of quiz shows.

'This romp through the world of TV quizzes is "F for Fourier Series" Fantastic!' ADAM SPENCER

'Australian quiz culture has found its Herodotus* in Brydon Coverdale. And if you say otherwise, par-bouw!'
[*Father of History] DAVID ASTLE, word-nerd and dictionary bloke on SBS's Celebrity Letters and Numbers

'I didn't think a book about quiz shows could be funny and moving. I was a fool. Loved it.' MARK HUMPHRIES

'Brydon Coverdale's The Quiz Masters takes the money and the box.' DAVID HUNT


Who wants to be a millionaire?

Brydon Coverdale did, and dedicated himself to outsmarting quiz masters on every Australian TV and radio trivia format he could - until he became so successful, he was hired by The Chase to stop others from winning.

The Quiz Masters is his fascinating, charming and funny memoir of how he played the game, along the way giving us a how-to guide for anyone who aspires to win a million dollars. As Brydon takes us through his own quizzing journey, he also reveals the psychology behind ordinary people who are prepared to gamble, under maximum pressure, in front of huge audiences, with only their brain in their armoury, and reveals how the great champions developed their special tricks of the trade.

The Quiz Masters truly takes us behind the scenes of a world that's both hugely familiar yet intriguingly unknown.

Brydon Coverdale appeared on several quiz and game shows as a contestant, winning $300,000 on Million Dollar Minute, before being cast as 'The Shark' on the Seven Network's The Chase Australia, where contestants must beat Brydon to win their cash prize. He has also worked as a writer for pub trivia and currently writes a bylined daily quiz in the Herald Sun, The Daily Telegraph, The Courier Mail and The Advertiser, as well as a weekly quiz in Australia's biggest rural newspaper, The Weekly Times. Away from quizzing, he spent eleven years as a cricket journalist for ESPNcricinfo, the world's leading cricket website, travelling the world to cover Australia's national team. He lives in Melbourne and is married with three children.