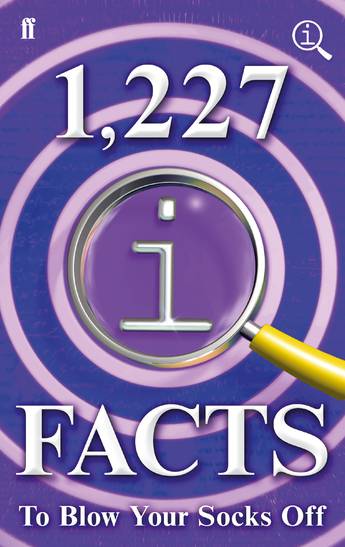 A buffet groaning with mouth-watering nuggets from QI's first ten years. It will make you look at the universe (and your socks) in an alarming new way.

Over ten series, QI has built a reputation as the best-loved and most intelligent panel quiz show on television by amazing, amusing and enlightening its audience with the quality of its research.

At the core of its appeal is the astonishing fact - the short memorable unit of information that makes you see the world differently. Everybody remembers where they were when they first learnt that kangaroos have three vaginas, that humans share more than half their DNA with bananas and that the tallest mountain on earth isn't Mount Everest. The best QI facts up-end our sense of the order of things and remind us that the universe is a bigger, stranger place than we imagine.

This year, QI celebrates ten years. To mark the occasion we have decided to gather together the very best facts we have unearthed in that time: QI's greatest hits, if you like.
More books by this author

John Lloyd has a broadcasting background. As a radio producer he devised The News Quiz and To the Manor Born before moving to television to start Not the Nine O'Clock News, Spitting Image, and Blackadder. If pressed, he'd concur with Heraclitus: 'abundance of knowledge does not teach men to be wise.'

John Mitchinson is from the world of books. The original Marketing Director of Waterstone's, he became Managing Director of Cassell, where he published The Beatles, Michael Palin and Brewer's Dictionary of Phrase and Fable.