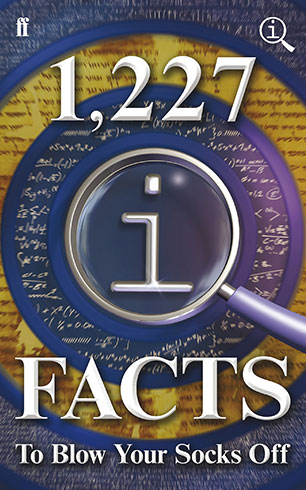 QI is the smartest comedy show on British television, but few people know that we're also a major legal hit in Australia, New Zealand, Israel and Africa and an illegal one on BitTorrent. We also write books and newspaper columns; run a thriving website, a Facebook page, a Twitter feed; and produce an iPhone App and a sister Radio 4 programme. At the core of what we do is the astonishing fact - painstakingly researched and distilled to a brilliant and shocking clarity. In Einstein's words: 'Everything should be as simple as possible, but not simpler.'

Did you know that: cows moo in regional accents; the entire internet weighs less than a grain of sand; the dialling code from Britain to Russia is 007; potatoes have more chromosomes than human beings; the London Underground has made more money from its famous map than it has from running trains; Tintin is called Tantan in Japanese because TinTin is pronounced 'Chin chin' and means penis; the water in the mouth of a blue whale weighs more than its body; Scotland has twice as many pandas as Conservative MPs; Saddam's bunker was designed by the grandson of the woman who built Hitler's bunker; Under the Wildlife and Countryside Act of 1981, it is explicitly illegal in Britain to use a machinegun to kill a hedgehog.

1,227 QI Facts To Blow Your Socks Off will make you look at the universe (and your socks) in an alarming new way.
More books by this author

John Lloyd has a broadcasting background. As a radio producer he devised The News Quiz and To the Manor Born before moving to television to start Not the Nine O'Clock News, Spitting Image, and Blackadder. If pressed, he'd concur with Heraclitus: 'abundance of knowledge does not teach men to be wise.'