1,342 QI Facts To Leave You Flabbergasted 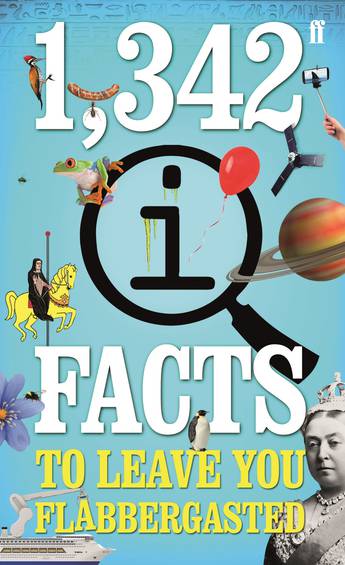 This is an astonishing trove of the strangest, funniest, and most improbable tidbits of knowledge from the clever lot at the hugely popular BBC quiz show QI.

The sock-blasting, jaw-dropping, side-swiping phenomenon that is QI serves up a sparkling new selection of 1,342 facts to leave you flabbergasted.

Trees sleep at night. Google searches for 'How to put on a condom' peak at 10.28pm. There is no word for time in any Aboriginal language. Scotland has 421 words for snow. Emoji is the fastest growing language in history. Astronauts wear belts to stop their trousers falling up. The name Donald means 'ruler of the world'. Tanks are exempt from London's Congestion charge. The anti-spam industry is worth more than the spam industry. Florida has more bear hunters than bears. Selfies kill more people than sharks. Two-thirds of deaths in the world go unrecorded. On each anniversary of its landing on Mars, the Curiosity rover hums 'Happy Birthday' to itself. Nostalgia was classified as a disease by the Royal College of Physicians until 1899. 1 in 3 children pretend to believe in Santa Claus to keep their parents happy. Black coffee drinkers are more likely to be psychopaths. When you blush so does the lining of your stomach. Quidditch, Digestive biscuits and overdrafts were all invented in Edinburgh. The world's only Cornish pasty museum is in Mexico. Nobody knows why the Oscars are called the Oscars. Las Vegas hosts an awards ceremony for people who make awards. In 2015, America's 'National Hero Dog Award' was won by a cat. A group of unicorns is called a blessing.

If there are any facts you don't believe, or if you want to know more about them, all the sources can be found on www.qi.com
More books by this author

John Lloyd CBE is the creator of QI and founding producer of The News Quiz, Not the Nine O'Clock News, Spitting Image, Blackadder and No Such Thing As The News. John Mitchinson, QI's first researcher, used to run the marketing for Waterstones and is the co-founder of award-winning publisher Unbound. James Harkin, QI's Head Elf, presents BBC 2's No Such Thing As The News, the hugely popular podcast No Such Thing as a Fish and produces The Museum of Curiosity. Anne Miller is a scriptwriter and researcher for QI and writes a literary column for Standard Issue magazine.