A Short History of Stupid 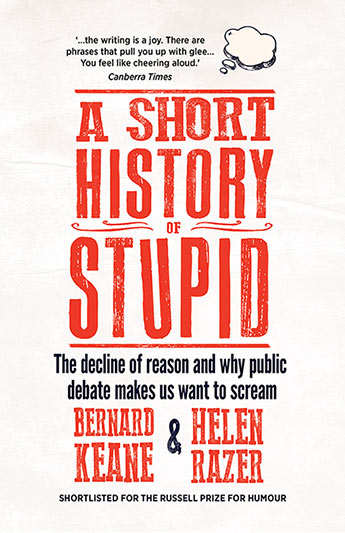 Alain de Botton meets Russell Brand in this glorious rant about everything that drives you mad about the modern world.

How did everything get so dumb?

How did we become hostages to idiocy?

What must we do to be freed from a captor whose ransom note simply reads, 'D'oh'?

The deteriorating quality of our public debate and the dwindling of common sense in media, politics and culture can drive you to despair and rage. It certainly drove writers Helen Razer and Bernard Keane to a desperate act: befriending each other for long enough to write a book.

Join forces with these uneasy allies to fight against a world that has lost its reason. Explore what's behind the remorseless spread of idiocy, and why there's just so much damn Stupid around you.

Stupid isn't just ignorance; it's not just laziness. Worse than the absence of thought, Stupid is a virus that drains our productivity and leaves us sick and diminished. And Stupid has a long, complex and terrible past, one we need to understand in order to defeat it.

A Short History of Stupid traces the origins of this maddening ill, examining the different ways in which we've been afflicted over the last three thousand years. It damns those who have spread Stupid and celebrates the brave few who resisted. It shows how Stupid tightens the grubby grip of the foolish around our throats.

Hilarious, smart, unpleasant, infuriating and rude, A Short History of Stupid is at once a provocation and a comfort. It will spark debate, soothe the terminally frustrated and outrage the righteously Stupid. It is a book whose Stupid time has come.
More books by this author

For more than two decades, Helen Razer has been broadcasting and writing her way into disagreement of various scales. For much of the 1990s she presented the breakfast program on ABC radio's youth network with her non-biological brother, Mikey Robins. She makes occasional returns to professional broadcast but is now better known as a somewhat peevish columnist. She has been employed as a contributor by The Age and The Australian, and is now a columnist on dissent with Crikey and gardening correspondent for The Saturday Paper. Helen has produced four previous books of humorous nonfiction, had a rest and returned to collaborate with her friend Bernard Keane to write her only serious work to date. Her frequently published thoughts on the impotence of current public debate are extended in A Short History of Stupid.

Bernard Keane has been Crikey's correspondent and politics editor in Canberra since 2008, writing on politics, media and economics. He was educated at the University of Sydney, where he studied history and failed to meet Helen Razer, who was there at the same time. Before joining Crikey he was a policy adviser and speechwriter in transport and communications. He is the author of the ebook War on the Internet and an incessant torrent of analysis, reportage and commentary on politics and public policy for Crikey.