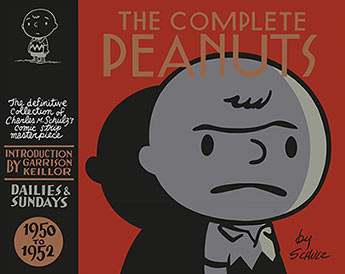 The beginning of an extraordinary project: 50 years of art and the most popular comic strip in the history of the world.

The beginning of an extraordinary project: 50 years of art

PEANUTS is the most popular comic strip in the history of the world. Its characters - Charlie Brown, Snoopy, Lucy, Linus, Schroeder, and so many more - have become dearly loved icons for generation after generation. Now Charles Schulz's classic, PEANUTS, will be reprinted in its entirety for the first time. In these beautifully produced editions, the strip will be presented in full in chronological order. They will be the ultimate books for PEANUTS fans the world over.

These first volumes will be of particular fascination to PEANUTS aficionados. Many of the strips from the series' first two or three years have never been collected before, in large part because they showed a young Schulz working out the kinks in his new strip. They include some characterizations and designs that are quite different from the cast we all know. And Snoopy debuts as a puppy!

The creator of beloved cartoon Peanuts, 'Charles Schulz was an innovative genuis of American comics and also the marathon man, drawing panel after four-square panel, year after year, creating a fantasy world that connected to kids as well as adults and all based on powerful iconic characters who express deep feelings of loneliness and resentment and despair.We remember him with love and admiration and gratitude for his gifts and his heroic endurance.' - Garrison Keillor