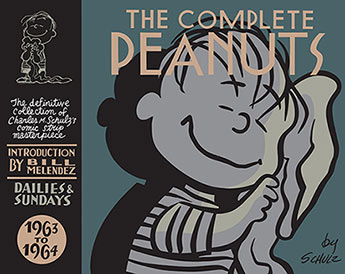 The Complete Peanuts 1963-64 includes over 150 strips that have not seen the light of day since their original appearance over 40 years ago, so this will be a trove of undiscovered treasures even for avid Peanuts collectors.

These 'lost' strips include Linus making a near-successful run for class president that is ultimately derailed by his religious beliefs (two words: 'great' and 'pumpkin'), and Snoopy getting involved with a group of politically fanatical birds. One wonders: Was it the political edge in these stories that got them consigned to oblivion for so long? Also worthy of note is an extended, never-reprinted sequence in which Snoopy gets ill and heads to the veterinarian hospital.

Also in this volume: Lucy's attempts at improving her friends branches out from her increasingly well-visited nickel psychiatry booth to an educational slideshow of Charlie Brown's faults (it's so long there's an intermission!).

Also, Snoopy's doghouse begins its conceptual expansion, as Schulz reveals that the dog owns a Van Gogh, and that the ceiling is so huge that Linus can paint a vast (and, as it turns out, unappreciated) 'history of civilisation' mural on it.

Charles M. Schulz was born in Minneapolis, Minnesota in 1922 and grew up in Saint Paul. He gained a reputation worldwide as a cartoonist for his work on Peanuts. He died in 2000.