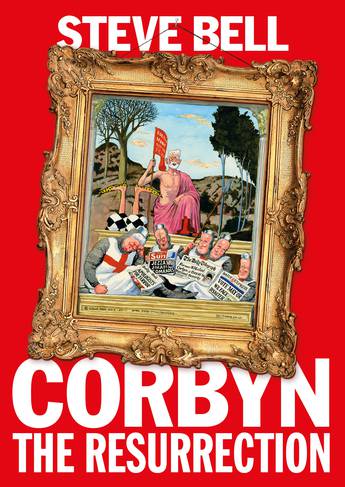 The must-have gift for all the Corbynistas in your life.

Since the 2015 Labour leadership election, Jeremy Corbyn has been on a seemingly unstoppable upward trajectory, from 'the unelectable' to 'the prime minister-in-waiting'. And Britain's best-loved political cartoonist, Steve Bell, has been with him every step of the way.

In Corbyn: The Resurrection, Steve has curated an unmissable selection of his most caustically witty cartoons charting the rise and rise of Corbyn. From his long-running Star Wars pastiche depicting Jez-Bi-Wan Conorbyn's leadership saga, to last year's shock snap election result and beyond, the result is an endlessly entertaining account of Corbyn's ascent, and one of the most turbulent periods in the history of UK politics.
More books by this author

Steve Bell is a multi-award-winning political cartoonist. Born in Walthamstow in 1951, he began to work for the Guardian in 1981 and his cartoons have appeared in the paper ever since. He is a trustee of the Cartoon Museum in Bloomsbury, and is married with four grown-up children. He lives in Brighton.