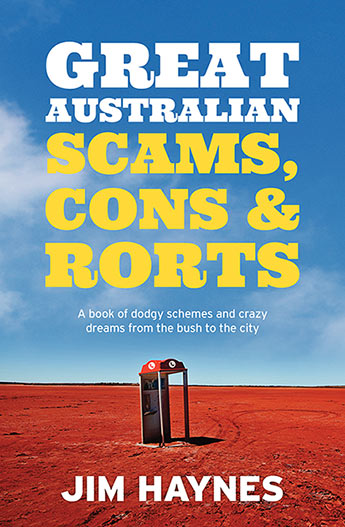 The ultimate collection of Australia's craziest cons and mad schemes from a master storyteller.

'Australian history is...so curious and strange, that it...does not read like history, but like the most beautiful lies... It is full of surprises, and adventures, and incongruities, and contradictions, and incredibilities; but they are all true, they all happened.' - Mark Twain

Australia is the birthplace and setting of some of the wildest, craziest and least-likely-to-succeed cons and rorts in history. From the cleverest double-crosses to the most unlikely and maddest schemes, master storyteller Jim Haynes reminds us that we've never been shy of pulling a trick or two.

So how did a clever bushman who 'couldn't lie straight in bed' steal a thousand head of cattle and get away with it even though he was caught 'red handed'? And what about the disappearing work of art that suddenly dissolved only to reappear at an auction years later? Or how about the butcher from Wagga who passed himself off as a French-born English duke to inherit a small fortune. And then there was the small matter of a horse, a tin of paint and a million dollar double-cross that became known as the Fine Cotton Affair.

In only the way he can, Jim Haynes has collected a veritable 'Gullible's Tales' of unexpected and surprising true stories that may seem hard to believe!
More books by this author

Before becoming a professional entertainer, song writer and verse writer in 1988, Jim Haynes taught writing, literature, history and drama in schools and universities from outback NSW to Britain and back again. He is the author of many Great Australian titles, including horse racing, yarns and unknown true stories. He is one of the country's most prolific and successful Australian authors. He was awarded an OAM in 2016 for 'service to the performing arts as an entertainer, author, broadcaster and historian'.