One man's quest to become the ultimate hipster 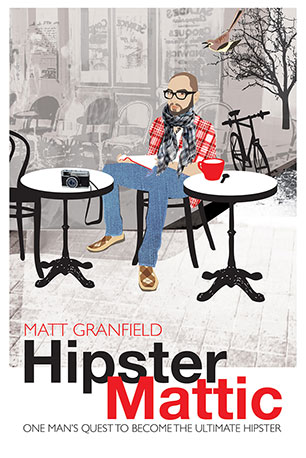 A funny, smart and gently irreverent look at this rising popular culture phenomenon of Hipsters told through Matt's journey to become the Ultimate Hipster!

Broken-hearted, alone and sobbing so hard there was enough snot coming out his nose to give an elephant a phlegm transplant, Matt Granfield decided the best way to find himself-to truly know who he was- was to become someone else.

Already a bit of a hipster, and with his ex's words ringing in his ears, Matt embarked on a journey to try to become the hippest person on the planet-the world's Ultimate Hipster.

The quest began innocuously enough-visiting trendy caf s, selling homemade jewellery at a market stall and writing poetry-but it quickly spiralled out of control. Soon there were National Bike Polo Championships to attend, tattoo parlours to visit, bands to start and organic vegetables to grow!

But would all these hipster adventures help Matt find himself? To truly know who he is? Would they help him become the Ultimate Hipster?

HipsterMattic is the hilarious and endearing tale of one man's heartache and his subsequent quest to find himself. A must-read for anyone who's ever tried (and perhaps failed) to be cool.
More books by this author

Matt Granfield is a writer, vagabond and volcanophobe from Brisbane. He was a newspaper reporter once upon a time, but gave it up when he realised there were more exciting things to write about than under-12s soccer finals. These days Matt writes and edits for The Drum, The ABC, Crikey and Marketing Magazine when he's not busy with his day job running a Social Media and PR agency. Matt is also a prolific blogger and tweeter. Over 12,000 people read Matt's personal blog every month. HipsterMattic is his first book.