A Philosopher's Guide to Relationships 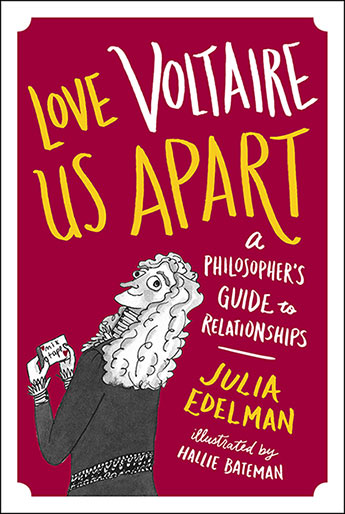 What would Kant's sexts look like? How would Jean-Paul Sartre and Simone de Beauvoir break up? What would Confucius think of Tinder?

Comedy writer Julia Edelman's New Yorker article 'Excerpts from Philosophers Breakup Letters' was a viral hit in 2015. From that same font of wisdom comes a hilarious spoof relationship guide with a philosophical edge.

Including essential information in chapters like 'Getting (Meta)physical' and '5 Ways To Know Your Man is Writing a Manifesto' - which gives the advice you need to avoid losing a relationship to revolution - Love Voltaire Us Apart is funny, smart, refreshingly original, and brought to life with charming illustrations from Hallie Bateman.
More books by this author

Julia Edelman grew up in New York. She studied film theory and philosophy at McGill University. Her work has appeared in The New Yorker, New York magazine, McSweeney's Internet Tendency, VICE, Cosmopolitan, Playboy, CollegeHumor and the Believer. She lives in Brooklyn.

Hallie Bateman is a Los Angeles-based writer and illustrator. Her work can be seen on halliebateman.com