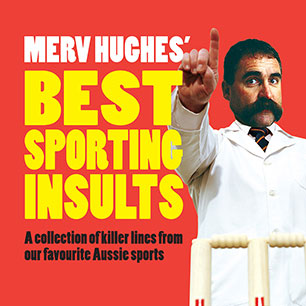 A hilarious collection of killer lines from the mouths of the sporting greats of cricket, rugby, footie and even the golf course - a must have for any sports fan.

Australian sportsmen are known worldwide for their hilarious and, quite frankly, inspired sledges. Over the years, there have been some classic lines uttered on a variety of sporting fields and arenas, whether it's across the cricket pitch or on the footy field.

Now, for the first time, we have the ultimate collection of sporting insults brought together by a man with a reputation for his humorous witticisms and cutting sledges: Merv Hughes.

Merv Hughes is one of the true characters of Australian sport. A big-hearted fast bowler, he was one of the greatest to have played our national game, taking 212 wickets and making 1032 runs during 53 Test matches he played for Australia. With his mischievous sense of humour, and his imposing moustache, Merv is regarded by both Australian and international media as one of sport's eminent providers of quotable quotes.