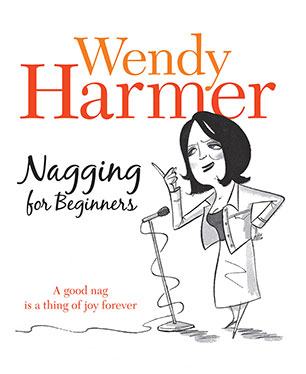 In any backyard, in any suburb of Australia, on any day of the week you'll hear a nag. It's as Aussie as the cricket in the summertime or sausages on the barbecue - hell, it's practically a sport for some people. But a nag isn't just a nag. No, no, no, there's much more to it than that - it's an art.

For a start, there's all the different kinds of nags (the classic nag, for example, or the variety nag); different people to nag (everyone from one's spouse to the local tradespeople); different occasions for nagging (after sex, on Christmas Day, etc); and then there's the ways in which technology can increase the reach and effectiveness of nagging (think of SMS-ing or faxing your nags, using them in your blog, even utilising small Post-It notes which can usefully be left around the house ...).

Wendy Harmer, Australia's best-loved comedienne (and a long-time connoisseur of a good nag) has assembled the very best nags in this charming little book which is guaranteed to provide hours of amusement and inspiration.

example of the Variety Nag: a list of complaints made without drawing breath.
More books by this author

Wendy Harmer is Australia's best-known, best-loved comedienne. She is a mother of two, veteran of the Edinburgh, Montreal, Glasgow and Mayfest comedy festivals and hosted 2DayFM's top-rating Breakfast Show for 11 years. Wendy is also the author of three books for adults, including the best-selling Farewell My Ovaries (Allen + Unwin, 2005) and Love and Punishment as well as two plays, a series of children's book about Pearlie, an urban park fairy, and the libretto for Lake Lost, a production by Baz Luhrmann for Opera Australia. Wendy has hosted, written and appeared in a wide variety of TV shows including ABC's Big Gig and In Harmer's Way. She has also hosted the Nine Network television Logies and has been a regular newspaper and magazine contributor, writing columns for Australian Women's Weekly and the Sydney Morning Herald's Good Weekend magazine.