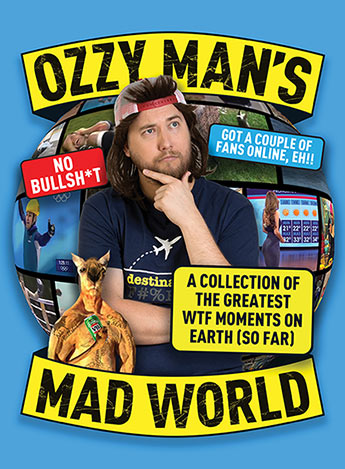 A book that reviews the bizarreness that is daily life on Earth... OzzyMan style.

'Ozzy Man always finds a way to spice up the banal, put some panache into the otherwise monotonous and regularly rouse your spirits over something stupid.' Bam Margera's blog

'Brilliant, funny, creative. Keep it up man. You are the best!' A super-nice YouTube subscriber

Meet Ozzy Man. A fair dinkum cheeky online entertainer via YouTube and Facebook. He loves his sport, he loves his wildlife, he loves strange things on the internet, and he's obsessed with Game of Thrones. The foul language in his videos may make some viewers blush, but to his legion of fans, his commentary is deep, profound and full of wisdom.

Ozzy Man's Mad World is a literary exploration of his favourite moments on Earth so far-or at least the ones he's managed to critique. Part nature book, part sports book, part news-and-viral-entertainment book, this is Ozzy Man's take on living in a mad world.

Relive the best of Ozzy Man Reviews from his first three years of hard yakka (a.k.a. taking the p*ss). Join him as he quietly reflects on his own commentary and his behind-the-scenes adventures in web media. And once you've made it to the end, you can brush up on your vocabulary with Ozzy Man's hand-picked glossary of Australian words and phrases. Yeah nah, this is a must-have book to flick through on the dunny.
More books by this author

Ozzy Man Reviews started a cheeky YouTube channel and Facebook page in April of 2014. He remembers it like it was yesterday. He had no long-term goals, no savings, no girlfriend, and no proper direction in life overall. He was so incredibly hopeless he didn't even cook his 2-minute noodles. He would eat them dry with the beef or chicken or shrimp flavouring sprinkled on top (this gourmet meal is best served with a fucken tawny port or beer). He would defend the dry noodle dish as being a legitimately tasty cuisine when family or friends voiced concern over its consumption, which they linked to his mental well-being.

Ozzy Man was also a mature aged student Curtin University in Perth during 2014. He eventually bloody graduated with a master's degree in Internet Communications. The wanker was born on February 2nd in 1986, so that makes him 31-years-old at the time of writing this. He still has no long-term goals, but he does have some savings and a wife now.