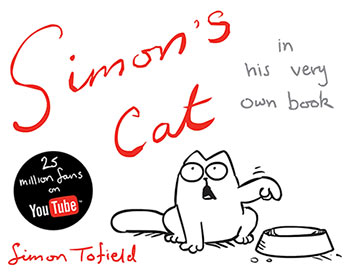 The first book in the phenomenally successful Simon's Cat series - over 120,000 copies sold so far

With over 25 million hits on YouTube in little over a year, Simon's Cat is a genuine word-of-mouth phenomenon.

Now available in book form for the first time, Simon's Cat depicts and exaggerates the hilarious relationship between a man and his cat.

The daily escapades of this adorable pet, which usually involves demanding more food, and his exasperated but doting owner, come to life through simple black-and-white line drawings. With a huge fan base that is growing daily, Simon's Cat is set to become a major new comic creation.

Simon Tofield is an award-winning illustrator, animator and director at Tandem Films in London. He owns three cats.