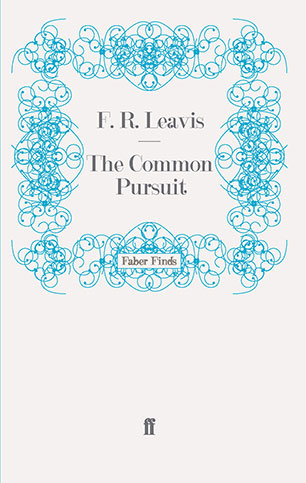 F.R. Leavis was the chief editor of Scrutiny, which between 1932 and 1953 had some claim on being the most influential literary journal in the English-speaking world. The Common Pursuit is a selection of Leavis's essays from Scrutiny,including his robust defence of Milton against T.S. Eliot, his deeply-felt engagement with Shakespeare, and his severe strictures on attempts to import sociology and political activism into the study of literature. The title of the book comes from a passage in Eliot?s ?The Function of Criticism?, in which the poet argues that the critic must engage in ?the common pursuit of true judgment?. For Leavis, this meant a strenuous insistence on discriminatory criticism ? clear statements about what is good and morally mature and admirable, and equally clear condemnation of what is trivial. The Common Pursuit, with its controversial judgments of Bunyan and Auden, Swift and Forster, remains as challenging now as it did in 1952, and it is easy to see why Leavis ? who was never offered a professorship by CambridgeUniversity ? held such sway over the study of English literature in his time.
More books by this author

F.R. Leavis was born in 1895 in Cambridge, where he would live and teach for most of the rest of his life. He volunteered as a stretcher-bearer in the First World War, and was badly gassed on the Western Front. Appointed Director of Studies in English at Downing College, Cambridge, in 1930, he remained there for the next thirty years, often at odds with the University establishment. In 1932 he and his wife Queenie Roth founded the hugely influential journal Scrutiny, which ran until 1953. He was one of the most important figures in the development of modern literary criticism, and in the elevation of English as a serious academic subject. He died in 1978.