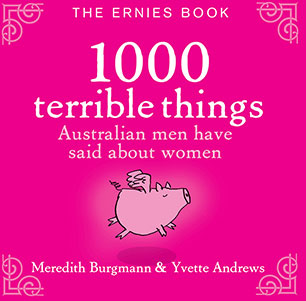 From judges to politicians, cricketers to journalists, chefs to the Governor General, a collection of the most appalling sexist remarks, insensitive statements and ignorant opinions Australian men have said about women. If it weren't so serious, you'd have to laugh.

In 1993 a small group of women gathered to celebrate the retirement of the original Ernie, a notoriously sexist trade union official who claimed that the only reason women wanted to become shearers was for the sex. The event grew to become the Annual Ernie Awards, the world's premier event shaming men for outrageous sexism.

I never turned away from Cathy. No matter how fat she was.
-Nick Bideau, Cathy Freeman's ex-coach and ex-partner

I bet she's now sorry she burnt her bra all those years ago (on Germaine Greer at 63).
-Ray Hadley, broadcaster

What do you think you're looking at, sugar tits?
-Mel Gibson, actor

With a nod to the good guys such as Don Bradman and Russell Crowe (really!), The Ernies Book is unashamedly wicked. If it weren't so funny, you'd have to cry.

For all these years Meredith Burgmann and Yvette Andrews ran the Ernie Awards. They are now running for their lives.
More books by this author

Meredith Burgmann is a writer, academic and powerhouse of Labor politics. She was president of the NSW Legislative Council for eight years until she stepped down from parliament in March 2007. Yvette Andrews worked with Meredith as an advisor and together they organised The Ernies for many years.