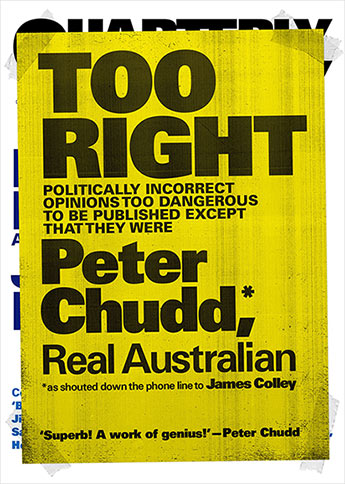 A satirical state of the union delivered by the most marginalised voice in Australian media: an angry, white male.

It's remarkable that I'm able to write this at all. I'm surprised that those lefty hate groups haven't kicked down my door and stolen my keyboard and thrown it into a creek. I suspect the only thing stopping them is the thought of having to put in an honest day's work of vigilante justice and the environmental impact of the gesture…"" Peter Chudd, Real Australian.

Move over Alan Jones and Andrew Bolt, Australia's leading conservative privileged white man has arrived. And even better, he's written a masterpiece that dismantles every loony left - or even vaguely moderate - political argument ever made in this country!

In Too Right, Peter Chudd, Australia's most controversial far-right columnist tells it like it is, unafraid of who's 'offended' by his 'poorly researched' opinions. Global warming? The only thing warming the world is the hot air from environmentalists. And what would climate scientists know about climate science anyway? Welfare? Well, that's anything but, well, fair. Racism? Every columnist has a right to be a bigot - and how dare people dismissive him as a 'white man'.

Read the tragic story of how this wealthy, privileged man believes he is, against all odds, the most maligned, victimised, discriminated-against person in the entire country for simply daring to speak the truth. Understand his dismay when people describe him as a hideous husk of a human who's single-handedly tearing the nation apart.
More books by this author

Young Walkley Nominated Satirist and creator of SBS Comedy's The Backburner and NailedIt! at Giant Dwarf. Works on ABC TV's The Weekly with Charlie Pickering and Gruen.Selected to perform at the Festival Of Dangerous Ideas, The St. James Ethics Centre and Splendour In The Grass among others. He has also had multiple sold-out seasons at The Sydney Comedy Festival.

2. Election Dysfunction: The age of experts is over

3. The Media Landscape is the Only Landscape I Respect

4. The Inner Quality of Inequality

5. Welfare is Anything But, Well, Fair

6. The Only Thing Warming the World is the Hot Air from Environmentalists

7. Who Comes to This Country and the Circumstances in Which They Are Imprisoned

8. How I Solved Race Relations by Ignoring Them

9. Save the Date: Why we should try our best to forget what happened on Australia Day