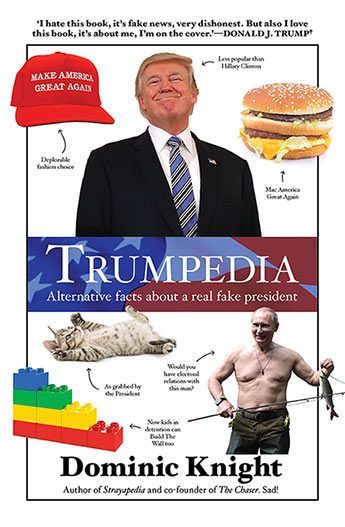 A bitingly funny satire on the world of Donald Trump, from the author of the Christmas bestseller Strayapedia.

'This book has the biggest sales numbers ever. No other book comes close, period.'
Sean Spicer

'Psst, want a copy of the Trumpedia audiobook? I taped the whole thing.'
Michael Cohen

'The pages have good people on both sides.'
Steve Bannon

'The president misspoke-he meant that he wouldn't like to read this book.'
Sarah Huckabee Sanders

'Every word is a lie, it's all true, and Trump should be locked up because he's innocent.'
Rudy Giuliani

'Trumpedia makes me proud to be the wife of the first African-American president. Be best!'
Melania Trump

Featuring his unlikely successes in television, wrestling and politics, along with disasters like Trump Vodka, Trump 'University' and Trump Child Incarceration, Trumpedia is a roller coaster ride from the absurd to the ridiculous to the genuinely disturbing. It's just like following Trump on Twitter.
More books by this author

Dom Knight is one of the founders of The Chaser, and as a writer on most of their projects he was definitely responsible for all of the jokes you liked and none of the bad ones. In recent years he's also presented serious programmes on ABC Radio and a silly one on Triple M.