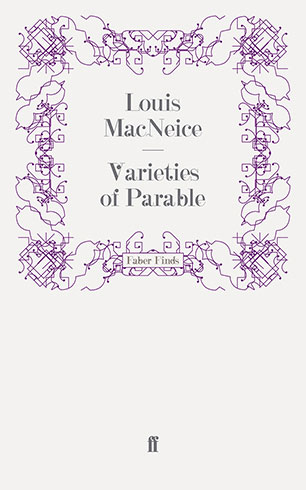 In Varieties of Parable, which comprises the Clark Lectures given by Louis MacNeice at Cambridge in 1963, a few months before his death, the poet discusses the significance of 'parable' for the times in which he lived, and implictly for his own poetic. The discussion ranges widely, including Samuel Beckett, Harold Pinter and William Golding (new writers with whom MacNeice felt an obvious kinship), and backwards genealogically to Spenser's The Faerie Queene or Bunyan's Pilgrim's Progress, by way of Alice in Wonderland and the fantasy tales of George MacDonald - as well as outwards into the exemplary European fictional world of Kafka. Most importantly, MacNeice ponders the uses of parable for poetry, and Varieties of Parable stands as an implict handbook to the landscapes and 'thumbnail nightmares' of his own later verse, whose new horizons were abruptly foreshortened by the poet's untimely death in autumn 1963. Varieties of Parable stands as MacNeice's last considered statement about poetry and poetics, and one of his most atmospheric and personal acts of literary criticism.
More books by this author