Women Are Crazy, Men Are Stupid

The simple truth to a complicated relationship 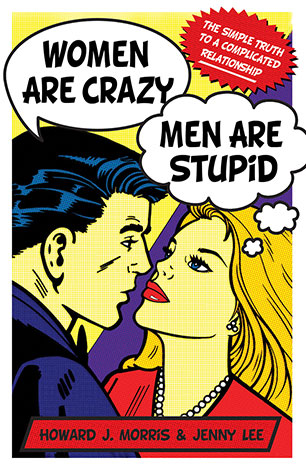 Cheaper than therapy, more fun than a break-up, at last the book that explodes ALL the myths and tells the crazy, stupid truth about love and how to get it - and keep it!

Since the dawn of time, when the first smitten caveboy tried to woo the object of his affections by shoving her into the mud, men have demonstrated that when it comes to women, they are profoundly stupid. And when it comes to men, women - no matter how intelligent or mature - are completely crazy.

Based on this simple yet groundbreaking insight, comedy writers and real-life couple Howard J. Morris and Jenny Lee have devised a relationship guide that is refreshingly honest, completely hilarious, and surprisingly practical. Using their own crazy/stupid romance as an example of these forces in action, they set out to explain why women ask questions that they absolutely do not want answered - and why men persist in answering them. What are men really thinking - or crucially, not thinking? Why do women view even the most mundane events through an emotional prism? Why do guys suck at being romantic? And why does every conversation with a woman lead back to whether or not she's fat?

Using wit, hard-earned wisdom, and a highly entertaining he said/she said format, the authors explore the surprising method to his dumbness and the valid reasons behind her insanity, while providing real solutions to perennial relationship problems. By teaching men how and why they're stupid around women, and showing women how to 'control the crazy' for everybody's sake, Women Are Crazy, Men Are Stupid helps couples to reach the place where giving isn't giving in, needing isn't needy, and where the sexes can break the dysfunctional patterns and find a way to live lovingly, happily ever after.
More books by this author

Howard J. Morris has had a long career in television, writing for the revolutionary HBO series Dream On, and then on the Emmy-nominated Home Improvement. He continued writing for 'stupid guys' like Damon Wayans on My Wife and Kids and Jim Belushi on According to Jim and 'crazy women' like Debra Messing on The Starter Wife. Jenny Lee was a writer on the hit comedy series Samantha Who?, starring Christina Applegate. She is also the author of three books of humor essays: Skinny Bitching, What Wendell Wants, and I Do. I Did. Now What?!: Life After the Wedding Dress. They live together in Los Angeles.