You'll Be Sorry When I'm Dead 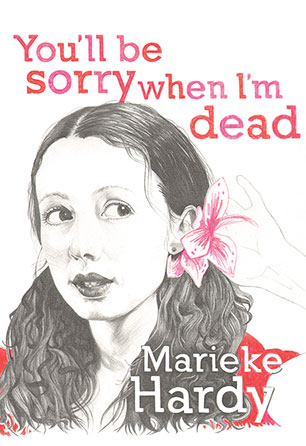 From childhood dreams of prostitution to her unabashed passion for heavy drinking, from growing up wide-eyed on the set of Australian soaps to her infatuation with Bob Ellis, these are the outrageously entertaining and deeply revealing reminiscences of a multimedia star.

He was wearing a pair of leather pants that clung like terrified orphans to his muscular thighs, and a revealing black mesh t-shirt. The outfit seemed at odds with the cream-coloured settee and floral print curtains.

From stalking and eventually meeting her Young Talent Time idol when she was twelve, to a particularly abhorrent encounter at a high-quality swingers night, and a mildly perverse obsession with Bob Ellis, there is nothing Marieke Hardy won't write about. Welcome to a chronicle of broken hearts, fervid pursuits, passionate friendships, deranged letter-writing, the allure of the bottle, the singular charms of musicians, the lost song of youth, and three very awkward evenings with varying prostitutes-exactly zero percent of which the author's parents will want to read. Add to that a slightly misguided attempt to give real-life friends and ex-lovers a 'right of reply' to the stories they appear in and it's fair to say an extended stint in the Witness Protection Program beckons.

Confessional, voyeuristic, painful, hilarious and heartfelt, You'll Be Sorry When I'm Dead reveals the acerbic wit, unflinching gaze and razor-sharp insight of a writer at the height of her powers-or the unhinged fantasies of a dangerous mind with not enough to do.
More books by this author

Marieke Hardy is a screenwriter, blogger and radio broadcaster. After many years writing a humorous television column in The Age, she moved on to regular political columns for ABC's The Drum and senior contributing work for Frankie magazine. She has been screenwriting Australian television drama for over fifteen years. Her six-part black comedy series, Laid, premiered in Australia in 2011. In the guise of literary reviewer she makes Jennifer Byrne's life an unbridled misery once a month on ABC TV's First Tuesday Book Club. She lives in Melbourne with a dog named Bob Ellis.