Inspirational landscape design ideas and plans for your own backyard 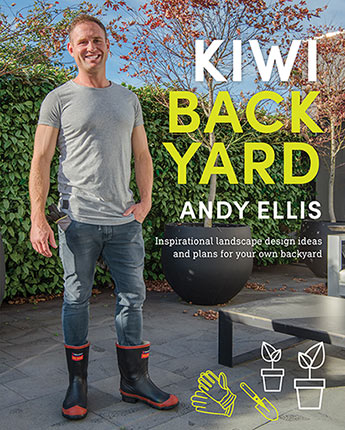 Andy Ellis, ex-All Black, Cantabrian and part-time landscape designer, presents creative landscape ideas that you can adapt for your garden.

Practical and inspirational, Kiwi Backyard is packed with great ideas from ex All Black Andy Ellis.

With themes including the inner-city sanctuary, the native haven, the Kiwi kid's playground and the entertainer's utopia, there's something for everyone within these pages.

In addition you'll find planting lists for each different theme and generic plans drawn up by Andy's friends at Kamo Marsh Landscape Architects giving you practical ideas for creating your ideal backyard.
More books by this author

Andy Ellis studied landscape architecture at Lincoln University on a Rugby Scholarship. He got three years through the four-year degree when professional rugby took over and he began playing for Canterbury from 2005 and the Crusaders from 2006. In total he played 154 games for the Crusaders, winning two Super Rugby titles. He was selected for the All Blacks in 2006 and played 28 tests, including the 2011 final in which New Zealand won the Rugby World Cup.

While playing rugby in 2009, Andy worked with his friend and landscape architect Danny Kamo on an entry for the Ellerslie Flower Show. In their second year they won a supreme award and were invited to compete in the Singapore Garden Festival, one of the big three in the world. With the help of Weta Workshop and Sir Richard Taylor they came up with a design that saw them become the first New Zealanders to win a gold at this prestigious show.

Andy's degree has been put on hold while he plays rugby overseas in Japan but he loves to stay involved with landscaping. He has appeared in a series of segments on TVNZ1's Seven Sharp where he visited Kiwi celebrities and learned about their passion for their backyards, something he feels many Kiwis have in common.