A Question of Commitment

Australian literature in the twenty years after the war 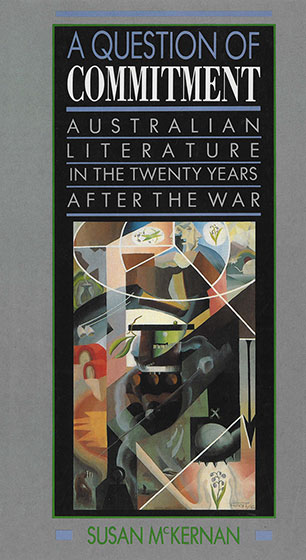 A Question of Commitment examines the attitudes of writers as diverse as James McAuley, Frank Hardy, Judith Wright, Patrick White and A. D. Hope as they responded to changes in postwar Australian society. Susan McKernan's lively exploration contextualises and explains the creative choices these writers made, and introduces wider intellectual and cultural issues which remain relevant today.

In the years since the Second World War, Australia has seen a period of literary creativity which outshines any earlier period in the nation's literary history. This creativity has its beginnings in the arguments and alignments which emerged at the end of the War, and the changes in perceptions of art and society which occurred during the fifties and early sixties.

A Question of Commitment examines the attitudes of writers as diverse as James McAuley, Frank Hardy, Judith Wright, Patrick White and A. D. Hope, as they responded to a changing Australian society during the postwar years. Through their work and that of many others, it considers the debates about literary nationalism, the artistic politics of the Cold War, the threat of technology to art in the Atomic Age, and the nature of the writer's role in the new society. It documents the way in which the political commitments of some writers and the resistance to commitment of others were challenged by political and social changes of the late fifties.

Susan McKernan's lively exploration of Australia's writers in a time of innovation provides the reader with the context needed to understand the creative choices they made and, in so doing, introduces wider intellectual and cultural issues which remain relevant to this day.
More books by this author

Susan McKernan is a graduate of the Australian National University and the University of Sydney. A frequent reviewer for the Bulletin and Australian literary journals, she has taught literature in Australian universities for a number of years and lectures in English at the University College, Australian Defence Force Academy.

5 Douglas Stewart and the Bulletin

6 The Writer and the Crisis: Judith Wright and David Campbell

7 A New Kind of Novel: the Work of Patrick White