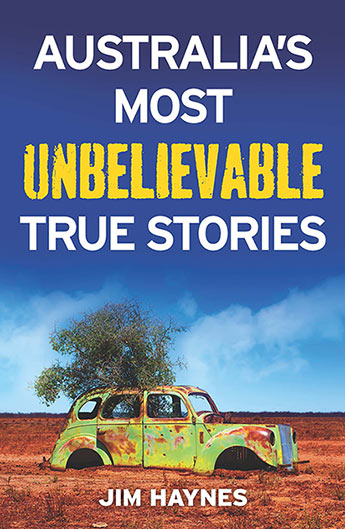 The ultimate collection of unbelievable true Australian stories: the unknown, the forgotten, and the surprising

Did you know that in 1932 the Australian army was called out to wage war on an invading army of 20,000...emus? Or that the first royal personage to arrive in Australia was the King of Iceland and he came as a convict? And how about the spooky phenomenon of the mischief-making Guyra Ghost?

From Jim Haynes, one of our most successful and prolific tellers of yarns and bush tales, comes this ultimate collection of unbelievable true Australian stories: the unknown, the forgotten, the surprising, the truly weird and the completely inexplicable.

Told with a refreshing understatement, Australia's Most Unbelievable True Stories vividly evokes a vanishing Australia when anything was possible, when characters were larger than life and the bizarre and strange were normal.
More books by this author

Jim Haynes has travelled far and wide to meet and interview the people whose stories make up his books. Before becoming a professional entertainer, song writer and verse writer in 1988, Jim taught writing, literature, history and drama in schools and universities from outback NSW to Britain and back again. He is the author of many Great Australian titles, including books on railways, aviation and horse racing. His is one of the country's most prolific and successful Australian authors.

A Few Ghosts and Some Colonial Corruption

When The End of the World Was Nigh . . . Perhaps

The Act That Brought the House Down

The Woman Who Murdered His Wife

The Girl With Peculiar Dark Eyes

The Tumultuous, Triumphant and Tragic Life of Tom Wills

The Prince's Braces, the Irish Madman and the Nurses

The Convict King of Iceland

The Princes Who Saw a Ghost

Part 3. Lest We Forget

Fighting Our Friends-the Battle of Brisbane

The Most Confused Battle Area in World History

The Enemy We Simply Didn't Understand

Part 4. Those Magnificent Women And Men

Some Aussie Ups and Downs

The Boy Who Watched the Ibis

The Girl from Hull